Generation V out in the world

Ever since Generation V was bought by Roc last year, most of my time (when not focused on work, or during the time when I was writing and polishing the initial draft of Iron Night) and focus was on how to best work on promoting the book before it was published. And now… the book is out. I can visit it any time in the bookstore, and now when I talk to people about it, they can actually order copies on their phones, and have e-copies pretty much immediately.

Which is incredible and amazing… but now I can’t help but wonder, now what?

Oh, don’t get me wrong – I know what I need to be doing. The classes I’m teaching are just going into finals, so there’s a lot of hand-holding and correcting going on there. Plus I received edits back from Anne for Iron Night, and those need to be worked on and finished before June 1. Plus I have the third Fortitude Scott book to plan and write. And I really should mop the floors of my house, because that totally got pushed to the back-burner for a few months when I was crazy busy.

But in a larger sense, regarding Generation V, now what? Worrying about how well it’s selling, or doing research and sending emails to try to get more people to talk about it – that has occupied the majority of my days this week. And I know that with my to-do list of actual writing, that’s going to have to change really soon. Maybe I’ll be able to spend a few hours a week thinking about and working on publicity stuff, but that’s probably it.

I’ve made a deal with myself – I’ll keep focusing on Generation V until the end of the week, but then the shift to Iron Night has to happen. So this is an interesting transition time. 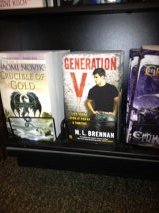 So until the rest of the week to keep obsessing about how awesome Generation V looks on a bookshelf at Barnes & Noble.
It’s like a baby picture that I can’t stop flashing!

Stuff To Check Out!

One of my favorite interviews ever at Yummy Men & Kick Ass Chicks – fantastic and thoughtful questions!

Another great Interview at The Qwillery.

The Supernatural Smackdown is still going on at Dark Faerie Tales, and Fort gets a speed date over at the Book Swarm.

Finally, another really strong review of Generation V by Tori over at Smexy Books. Very thoughtful and great stuff.

And in closing, my usual appeal – wouldn’t you love to own your very own copy of Generation V?

Three out of four baby otters approve of you buying Generation V. The fourth would have approved it, but was too busy snoozing adorably.