← On Vampires: Dracula
How I Got An Editor →

On Vampires: Anne Rice and the Vampire Chronicles

Anne Rice is the person who made one of the biggest recent changes to the vampire myth. Namely, her work made vampires homoerotic.

Before Rice hit the scene, Dracula bit pretty girls while gal vampires heaved menacingly at human guys. Then the gal vampires were usually staked by those guys, because that was always the trial run before going up against Dracula.

But notice the pattern – Dracula either hung out completely by himself (maybe with the occasional wolfman if this was a mash-up movie), or had kind of a back-up chorus of three or fewer bosomy vampire gal-pals. And the biting always fell along very strict hetero-normative sexual lines. Boys only bite girls! Girls try unsuccessfully to bite guys!

Rice’s first book, though, is about a guy named Louis who is bitten and turned by a vampire named Lestat. Just two guys biting, ya’ll. They then live together for years, biting other people merrily regardless of gender, until one day they adopt a little girl named Claudia, and show everyone that family is about love, not sexual orientation.

You know, it wasn’t until I was actually thinking about the movie to write this blog entry that I started getting all “Claudia Has Two Daddies” about it. This makes sense, since it was also not until YEARS after I’d read it that I realized that The Chronicles Of Narnia has an entire Jesus sub-text to it.

Okay, and maybe that “adopt a little girl” last part was that Lestat makes a bone-headed decision to turn a six-year-old girl into a vampire, which ends badly first when Claudia is, you know, kind of pissed about being forever trapped in the body of a six-year-old when her mind kept developing. She tries to kill Lestat, but six-year-olds can’t do anything right, and he lives. Then there’s some running around in Europe, and the vampires over there are creeped out by Claudia and burn her. 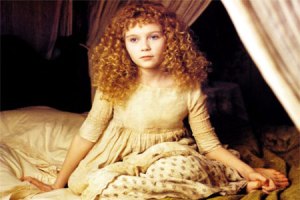 Little girls are always creepy. It’s why horror movies love having little girl ghosts or little girl psychics. But little girl vampires are even creepier, especially when they have hair like that and start trying to totally hit on Brad Pitt.

My first exposure to Rice’s vampires was when I saw the movie. It came out in 1993, but this is another one that I saw on video, so I’m going to hazard a guess that I saw it around 13 or 14. Notable about the film is that this was done back when Brad Pitt was known as a total pretty-boy actor (remember those days?), and that Kirsten Dunst played the six-year-old. And that I think that ¾ of the movie’s budget must’ve been spent on hair-care products, because everyone looks like they are in the middle of a Vidal Sassoon ad. The vampire as played by Fabio had totally just arrived – note that old-school Draculas always have very slickly pomaded hair a la Legosi.

Yeah, no one was taking him seriously as an actor back then. Probably because he looked like Fabio’s understudy.

I read the book Interview With The Vampire a few years later, probably around 16 or 17. The Vampire Chronicles were pretty big in my high school at the time, which is kind of funny now that I look at high schoolers and Twilight. Did my generation’s parents look at us and wonder what the hell was up with all the vampire humpery? Probably. At least our vampires were post-high school Eurotrash, though. And they never sparkled.

True fact: I had a friend in high school who would very seriously tell you that she was a vampire. It was pretty weird. So I shouldn’t claim too much high ground over contemporary high school kids – after all, we were pretty stupid at times too.

Anyway, back to the Vampire Chronicles. After I read the first book, I kind of limped through The Vampire Lestat. Okay, I skimmed it. Truth: Lestat spends so much of that book covering his ass for shit that went down in book one that I seriously wonder whether Anne Rice had any original plans to write a sequel. Plus, Lestat whines. Worse than Louis in book one.

Note this other new addition to the vampire mythos: The vampire as brooding whiner. And Anne Rice completely pioneered this. I mean, sure, Dracula will periodically get chatty, and he spends a lot of time wandering around Castle Dracula in his bathrobe with his hair still in curlers, but the man doesn’t whine. He turns around and says, “Dude, I need to get out of my rut!” Then he buys property in England and starts biting British girls – problem solved! He could write his own self-help book.

This is the face of depression.

Not so with Rice vampires. Pretty fluffy hair, brooding and whining. Interesting to note is that her vampires are pretty damn eroticized, but become basically impotent when they are changed. It’s a neat trick, and probably part of why the Rice vampires were so popular with high school girls.

There’s no staking with Rice vampires. They can be burned with sun or fire, and I sort of remember some beheading chatter at some point (this was a while ago), but that’s it. Fundamentally, Rice also shifted the playing field in her books. Dracula is about when the vampire comes into contact with people, and how they have to drive him back. Rice vampires hang out together, live together, play together, comb their shiny shiny hair together, and get super political. Humans aren’t involved. In fact, when humans do get involved, they are invariably turned into vampires. They don’t say, “Shit! You’re killing people! I need to get my Jonathan Harker on!” They say, “Immortality, increased hotness, and shiny hair? Dude, sign me up.” There isn’t even any brooding about it – the thing that I always found both off-putting and interesting about the Rice universe is that vampirism itself is presented as the natural thing to desire. The vampire state has shifted, then, from the Dracula presentation of The Fate Worse Than Death to The Fate That Will Totally Save Your Life And Clear Up Your Skin. It’s a pretty significant change.

My involvement with Rice was always problematic. I actually never finished The Vampire Lestat, and instead skipped forward to Queen Of The Damned, which I had heard from a friend was better. It totally was, by the way. Queen Of The Damned is absolutely my favorite Rice book, because she starts working on a really large canvas, brings in larger than life characters, and because I was able to completely skip over the Lestat bits and still keep up with the story.

I never read The Tale of the Body Thief, and I skipped around in Memnoch The Devil, which to be honest I only picked up in the first place because I’m Catholic, and no Catholic alive can resist a book that mentions the Veronica’s Veil story.

By this point, Anne Rice was entering a really prolific period, and new books were actually coming out at the same time that I was now old enough to read them, but I did call it quits around then. I did read Pandora when it came out, but that’s notable in that it was a pre-history vampire saga with a lot of emphasis on the days of the Roman Empire. It was a good one, and I think was one of the times when I was really able to appreciate Anne Rice’s writing in a venue where I wasn’t having Lestat-related issues.

But, without a doubt, The Vampire Chronicles really changed the vampire scene. Most importantly, vampires in those books had gone from monsters to heroes – they weren’t something that the characters encountered, they WERE the characters. My next two big influences were ones that really built on the foundation that Rice put down.

← On Vampires: Dracula
How I Got An Editor →