In the first three months of the year (January – March), I read 26 books and had 14 that I loved. From April to June I read 22 more books, bringing my total for the first half of the year to 48. It was a big mix – I read some books that absolutely blew my mind, some that were just so-so, and a few others that I really couldn’t stand. I also read a number of books for research, but I’ll save those for a special section at the end of the year. (“Wow, M. L. Brennan’s list of research texts! I can’t wait!” said no one ever)

Anyway, here are the amazing ones, in the order that I read them:

1. The Broken Crown by Michelle West

EPIC. This book is EPIC. In every sense of the word. Even the character names are epic. In fact, there are a few names that I just gave up completely even being able to remember which was which.

The Dominion, once divided by savage clan wars, has kept an uneasy peace within its border since that long-ago time when the clan Leonne was gifted with the magic of the Sun Sword and was raised up to reign over the five noble clans. But now treachery strikes at the very heart of the Dominion as two never meant to rule–one a highly skilled General, the other a master of the magical arts–seek to seize the crown by slaughtering all of clan Leonne blood.

I sat down to read a few chapters, and ended up reading the whole thing. That’s how good this thing was.

Yeine Darr is an outcast from the barbarian north. But when her mother dies under mysterious circumstances, she is summoned to the majestic city of Sky. There, to her shock, Yeine is named an heiress to the king. But the throne of the Hundred Thousand Kingdoms is not easily won, and Yeine is thrust into a vicious power struggle.

A few years ago, I taught at a small liberal arts college, and I was lucky enough to be able to design my own literature course. I taught dystopian fiction, and in the three times I ran the course, I invariably had a blast. There were always a lot of fantastic conversations about morality, human nature, and situational ethics. One thing that I used to do in the first week of class was show a video about the Milgram experiments that I’d first seen in a social psychology class – it set the tone for discussion, and gave everyone a good set of framework. (I also would pass out a photocopy from a great book called Some We Love, Some We Hate, Some We Eat on the subject of puppy hams – that one was also useful because it introduced the subject of how we could arbitrarily create life and death differences – in this case, puppies that were sold as pets and puppies that were sold for dinner were in the same marketplace, but in different colored cages – I think that particular handout served as pretty fair warning for the directions the class took) Anyway, long story. One of my favorite students (yes, I might bitch a lot about my job, but 90% of the students are fine, and about 40% are downright delightful) had read this in a psychology class and suggested it to me. I got a copy through paperbackswap after about two years on a waitlist, and then it sat on my to-read shelf for about another year – but I have now finally read it! Very thoughtful, and very very disturbing. The idea of situational evil, and that we are all capable of atrocities, is one that I think is really disturbing, yet important.

What makes good people do bad things? Renowned social psychologist Philip Zimbardo has an answer, and in the Lucifer Effect he explains how-and why- we are all susceptible to the lure of the “the dark side.” Drawing on examples from history as well as his own trailblazing research, Zimbardo, the creator of the Standford Prison Experiment, details how situational forces and group dynamics can work in concert to make monsters out of decent men and women. By illuminating the causes behind this disturbing metamorphosis, and by highlighting the ways in which individuals can resist the temptation to give in to evil, Zimbardo enables us to better understand a variety of phenomena, from corporate malfeasance to the prisoner abuse and torture in Abu Ghraib to organized genocide. This is a book that forces us to reexamine what we are capable of doing, individually, and collectively.

4. All Joy And No Fun: The Paradox of Modern Parenting by Jennifer Senior

The instant New York Times bestseller that the Christian Science Monitor declared “an important book, much the way The Feminine Mystique was, because it offers parents a common language, an understanding that they’re not alone”

I heard an interview with the author on NPR (yes, I’m THAT person who I make fun of constantly in my books), and it was interesting enough that I picked up the book. It’s very interesting – it’s not a parenting guide, but instead is an examination on the evolution of our ideas of modern parenting, and the effects that children have on their parents. One very fun tidbit – as children have become ever more economically useless (after all, we don’t have them work the fields anymore), they have been ever more emotionally precious. Very, very interesting.

In All Joy and No Fun, award-winning journalist Jennifer Senior analyzes the many ways children reshape their parents’ lives, whether it’s their marriages, their jobs, their habits, their hobbies, their friendships, or their internal senses of self. She argues that changes in the last half century have radically altered the roles of today’s mothers and fathers, making their mandates at once more complex and far less clear. Recruiting from a wide variety of sources—in history, sociology, economics, psychology, philosophy, and anthropology—she dissects both the timeless strains of parenting and the ones that are brand new, and then brings her research to life in the homes of ordinary parents around the country. The result is an unforgettable series of family portraits, starting with parents of young children and progressing in later chapters to parents of teens. Through lively and accessible storytelling, Senior follows these mothers and fathers as they wrestle with some of parenthood’s deepest vexations—and luxuriate in some of its finest rewards.

Meticulously researched yet imbued with emotional intelligence, All Joy and No Fun makes us reconsider some of our culture’s most basic beliefs about parenthood, all while illuminating the profound ways children deepen and add purpose to our lives. By focusing on parenthood, rather than parenting, the book is original and essential reading for mothers and fathers of today—and tomorrow.

5. The Palace Job by Patrick Weekes

The most powerful man in the republic framed her, threw her in prison, and stole a priceless elven manuscript from her family.

With the help of a crack team that includes an illusionist, a unicorn, a death priestess, a talking warhammer, and a lad with a prophetic birthmark, Loch must find a way into the floating fortress of Heaven’s Spire–and get past the magic-hunting golems and infernal sorcerers standing between her and the vault that holds her family’s treasure.

It’d be tricky enough without the military coup and unfolding of an ancient evil prophecy–but now the determined and honourable Justicar Pyvic has been assigned to take her in.

But hey, every plan has a few hitches.

6. The Voyage of the Basilisk by Marie Brennan

Devoted readers of Lady Trent’s earlier memoirs, A Natural History of Dragons and The Tropic of Serpents, may believe themselves already acquainted with the particulars of her historic voyage aboard the Royal Survey Ship Basilisk, but the true story of that illuminating, harrowing, and scandalous journey has never been revealed—until now. Six years after her perilous exploits in Eriga, Isabella embarks on her most ambitious expedition yet: a two-year trip around the world to study all manner of dragons in every place they might be found. From feathered serpents sunning themselves in the ruins of a fallen civilization to the mighty sea serpents of the tropics, these creatures are a source of both endless fascination and frequent peril. Accompanying her is not only her young son, Jake, but a chivalrous foreign archaeologist whose interests converge with Isabella’s in ways both professional and personal.

Marie needs to stop being such a damn good writer. Tropic of Serpents was on my first quarter list in 2015. I WON’T LET YOU CONTINUE TO DOMINATE THESE LISTS, MARIE!
Side note: Whoever thought it would be a great idea to print The Voyage of the Basilisk entirely in blue ink deserves a stern scolding. My reaction upon realizing that it was the WHOLE book in colored ink was a very heart-felt UH OH.

Science is, of course, the primary objective of the voyage, but Isabella’s life is rarely so simple. She must cope with storms, shipwrecks, intrigue, and warfare, even as she makes a discovery that offers a revolutionary new insight into the ancient history of dragons.

In his highly acclaimed debut, Scott Lynch took us on an adrenaline-fueled adventure with a band of daring thieves led by con artist extraordinaire Locke Lamora. Now Lynch brings back his outrageous hero for a caper so death-defying, nothing short of a miracle will pull it off.

After a brutal battle with the underworld, Locke and his sidekick, Jean, fled to the exotic shores of Tal Verrar to nurse their wounds. But they are soon back to what they do best–stealing from the rich and pocketing the proceeds. Now, however, they have targeted the grandest prize of all: the Sinspire, the world’s most exclusive, most heavily guarded gambling house. But there is one cardinal rule: it is death to cheat at any game.

Brazenly undeterred, Locke and Jean have orchestrated an elaborate plan to lie, trick, and swindle their way straight to the Sunspire’s teeming vault. But someone knows the duo’s secret–and has every intention of making them pay for their sins. 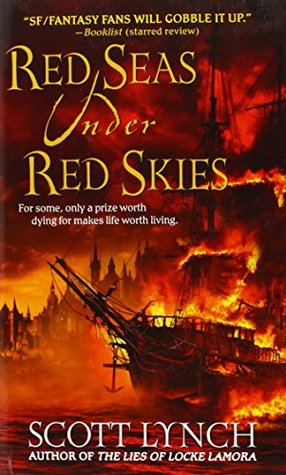 The first book in the series was included in my first quarter list, so clearly whatever Lynch is cooking, I’m a fan of it. A lot of intricate crafting, glorious worldbuilding, and a lovely sly wit. I’m enjoying where he’s taking the two main characters, though I have to say, being friends with these guys is basically taking your life into your own hands. That lost love of Locke’s might’ve had the right idea when she beat feet out of town. Something I’m really impressed by is the delicate balance Lynch strikes between how much of the Deception A plotline he shows, and how much he keeps back for the final reveal. It’s tricky, and I’m enjoying it.
Bonus points were awarded for the presence of female pirates and naval officers, plus all the nautical cats and kittens.